*Promotion is subject to availability, may not be combinable with certain fares or other amenity offers, is capacity controlled and may be withdrawn at any time. Other restrictions apply.

READY TO PLAN YOUR SHORE EXCURSIONS?

Because Quebec City is Canada’s most historic city and the only walled city in North America, it was classified by UNESCO as a World Heritage Treasure by. Visitors are greeted by an authentic, profoundly French city. The city features winding, cobbled streets with 17th- and 18th-century stone houses and churches, graceful parks and squares, and many monuments. Great emphasis has been placed on Québec nationalism, and the city has become a symbol of glorious French heritage. Visit the oldest church in Québec, Our Lady of Victory, dating from 1688. See the cellars of Maison des Vins, where Québec Société des Alcools sells more than 1,000 kinds of rare vintage wines in a warehouse dating from 1689. See the exhibits at Civilization Museum. The most striking building is celebrated landmark Château Frontenac. Looming high above St. Lawrence, the turreted building with its slanting, copper roof is an impressive sight. Built to accommodate colonial governors, it is now a hostelry.

The Saguenay fjord allows the waters from the Atlantic Ocean and of the Gulf of Saint-Lawrence to flow into the heart of the Saguenay Kingdom. It drains the water of a catchment basin that covers 88,000 km2 and is 550 kilometres long.

This arm of the sea originates at the centre of Quebec and in the northern forest east of Canada. It is unique in the world by its geographic location, the fantastic history and the distribution of the population that settled along the entire length of its shores.

The Saguenay region of Quebec is most known for its distinctive geological features. Here you can visit Le Monde Enchante, a park with waterfalls, covered bridges and gazebos overlooking the Saguenay River. The fjords, mountains, waterfalls and the beautiful village of Petit-Saguenay attract visitors from all over. Visiting the New French Village, one can experience what life was like when this area was first settled by French explorers. Among museums in the area are the glass art factory, the Cheddar Cheese Museum and the Zoo Saint Felicien.

Set-Iles is a city in the northeastern region of Quebec, Canada. The population is estimated at about 25,686 according to the Canada 2011 Census.  This destination offers a diverse plant life with one of the prime destinations being the Les Jardins de l’Anse which offers 6 different gardens to explore.

The picturesque scenery of Havre-Saint-Pierre's chain of islands is an excellent get away for outdoor and nature lovers. If water is your game of choice there is sailing, rafting, kayaking, and boat tours to enjoy. Anglers will also have an excellent time pursuing world-class trout and salmon in the clear water rivers and lakes.

The islands offer beautiful green summits, excellent beaches, and spectacular natural scenery. Nature lovers will enjoy visiting Bird Rock Sanctuary, which serves as a refuge for colonies of aquatic birds such as petrels, northern gannets, razorbills, murres and gulls. Because the islands are connected by sand dunes, it is easy to find lagoons linked to the sea, and the calm warm waters of the lagoons make great areas to go windsurfing.

Charlottetown, with a population of nearly 40,000, is the island’s capital
and one of Canada’s oldest towns. Established in 1765 by Capt. Samuel Holland,
the settlement was named for Queen Charlotte, wife of King George III of England.
The old part of town offers many historical monuments, including important government
buildings, churches, old mansions and museums, along with parks and gardens.
Outside of Charlottetown, discover miles of farmland, small villages, a scenic
coast and the legacy of Lucy Maud Montgomery, author of Anne of Green Gables,
the feature of Charlottetown’s annual major theater festival.

Sydney is located on Cape Breton Island on the east side of the Sydney River. Sydney has a strong ethnic population. As the only significantly industrialized district in Atlantic Canada, Sydney is the heart of Nova Scotia’s second-largest urban cluster. The city’s central business district impresses with the variety of products and services offered by downtown merchants. The town has become an important gateway to the scenic and historic attractions of Cape Breton Highlands and for cruising on the Bras d’Or Lakes. On the city outskirts is Fortress Louisbourg National Park, presenting Canada’s largest historical reconstruction. Here visitors can enjoy a town perfectly restored to its 1740 appearance. A walk on the half-mile Boardwalk promenade in the heart of downtown provides a panoramic view of the harbor. Apart from Louisbourg Fortress, the town also features a railway museum at the Sydney and Louisbourg Historical Society and the Atlantic Statiquarium, a marine museum devoted largely to underwater treasure.

Halifax is Atlantic Canada’s center of business, research and education. Strong emphasis is placed on cultural diversity, historic restorations and the preservation of heritage and culture. The Halifax Citadel Fortress dominates downtown Halifax. Take a stroll along the waterfront past restored buildings and warehouses of Historic Properties, or a walk in delightful Public Gardens, the oldest Victorian gardens in North America. Halifax’s sister city of Dartmouth lies on the opposite shore and is reached via the oldest saltwater ferry in North America. The spectacular view of Halifax harbor makes the trip worthwhile. Housed in former Dominion Building, the Art Gallery of Nova Scotia features Nova Scotia folk art and maritime artists. A two-hour walk will easily show you the major highlights of historic and scenic Halifax. Visit Historic Properties, St. Paul’s Church and Province House, the latter two being the oldest buildings in the city. Granite Springs is rated one of the finest 18-hole golf courses in Atlantic Canada.

Drawn by the pines, granite shores, fresh lobster and stunning views from Cadillac Mountain, captains of industry once kept summer homes here. The charming little town, and all the rest, remain. And the rocky boulder beaches on its shoreline are now Acadia National Park, a preserved expanse of vintage Down East scenery.

The history and bricklaid beauty of Boston is easy to enjoy. Follow the Freedom Trail past Old North Church, Paul Revere Park, Fanieul Hall, the Commons, Old Ironsides and more landmarks of America's birth. Across the Charles River is Cambridge and Harvard. Venture to Marblehead and Salem to the south, or Lexington and Concord to the north. Back in town, have clam chowder at the warf or great Italian food in North End.

Newport became important as a resort for wealthy industrialists who built their “summer cottages”, modeled after European palaces, here and elevated Newport to position of “Queen of Summer Resorts.” A tour of the mansions is a must. Newport is also famous as a yachting capital and site of international tennis championships. Colonial Newport boasts a collection of 18th- and 19th-century and pre-Revolutionary buildings. Colonial Downtown is best explored on foot, and much of the town was burned down during British occupation, but enough buildings survived to rival Boston in number of original 18th-century homes. George Washington’s assurances to Newport’s Jewish community of religious liberty encouraged them to build Touro Synagogue in 1763, making it the oldest in the nation. St. Mary’s Church is the oldest Catholic parish in Rhode Island. The Grand Newport Casino and International Tennis Hall of Fame held the first national tennis championship in 1881 and is now Tennis Hall of Fame with a museum on tennis fashions and trophies.

New York City is a captivating, awesome, and glamorous empire. There are countless museums, theaters, restaurants, parks and towering skyscrapers. It is a shopping capital of the world. In midtown Manhattan are most of the designer boutiques; Fifth and Madison Avenues are locations of such world-renowned department stores as Bergdorf Goodman, Lord & Taylor and Saks Fifth Avenue. FAO Schwartz is one of the largest toy stores in the world. New York is also a world-class culinary experience - with pockets of ethnic restaurants: Chinatown, Little Italy, Little India and Little Brazil. The famous Statue of Liberty sculpture symbolizing the American Dream can be reached by ferry from Battery Park. Once the first stop for over 12 million immigrants, Ellis Island now houses the Museum of Immigration, including the American Immigrant Wall of Honor. The Art Deco Empire State Building is one of the world's best-loved skyscrapers with two observation decks. Also take time to visit the Chrysler Building, Radio City Music Hall, and St. Patrick’s Cathedral.

The Upper East and Upper West: Tales of Money and Scandal

The Life of Alexander Hamilton

The Floor is Yours at Madison Square Garden

The Origins of NYC Sightseeing Program

A Cultural Walk Through Little Italy and Chinatown 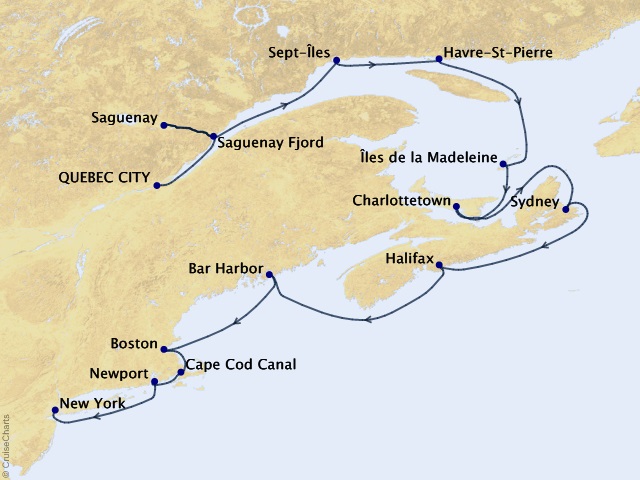 Itinerary subject to change without notice. Please confirm itinerary at time of booking.

Departure Date:
9/30/2022
Number of Nights
11
Cruise Inclusions:
Remarks:
Cruise Only Fares are in US dollars, per person, based on double occupancy.

All fares are quoted in US Dollars.

All prices per person and in USD unless otherwise stated.
Offer ID:
1404720

Reference this number when contacting our agency so we may better serve you. Also keeping this number handy will allow you to locate this document again quickly.

Information and pricing is subject to change without notice. While we do our very best to ensure that information and pricing appearing in this website is complete and accurate, we cannot be responsible for incomplete and inaccurate representations, which may or may not be under our control. In the event of a pricing error, misrepresentation or omission, we reserve the right to adjust the pricing or make any other corrections.