Three hundred years ago a small band of English pilgrims, seeking religious freedom, landed on this island and gave it the ethereal name, Eleuthera, which means "Freedom" in Greek. The name seems to be as apt today as it was then. Eleuthera, delivers on its initial promise by bestowing its gifts upon the lucky who've stumbled upon it, or the smart who know to go there. Miles of glistening pink and white sand beaches, serene colonial villages, and the rolling acres of pineapple plantations make Eleuthera an island of the most casual sophistication. The cool laziness of Eleutherean life and dusty-yet-drenched colors of the island give it the feel of a giant illusion; it seems to have a kind of unbounded air of calm and grace. With its two companions, Harbour Island and Spanish Wells, Eleuthera has long been a favored destination among smart travelers seeking a bit of quiet charm. 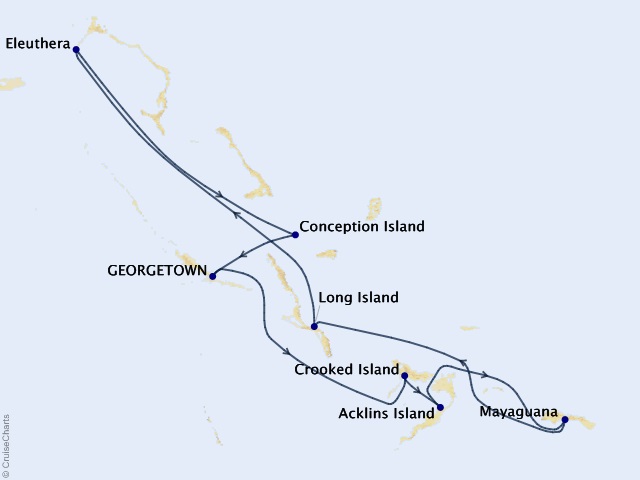 Itinerary subject to change without notice. Please confirm itinerary at time of booking.

Price is per person, double occupancy.

Cost Includes: All accommodations aboard ships or in hotels per itinerary or similar, all meals and nonalcoholic beverages aboard ship, meals on land as indicated, air transportation whe

All prices per person and in USD unless otherwise stated.

Reference this number when contacting our agency so we may better serve you. Also keeping this number handy will allow you to locate this document again quickly.

Information and pricing is subject to change without notice. While we do our very best to ensure that information and pricing appearing in this website is complete and accurate, we cannot be responsible for incomplete and inaccurate representations, which may or may not be under our control. In the event of a pricing error, misrepresentation or omission, we reserve the right to adjust the pricing or make any other corrections.